A CHURCH FOR SANDYMOUNT

The land upon which St John’s is built was marshland before 1800 when a wall was built along the present coast road, at either side of the newly erected Martello tower, thus opening the way for reclamation and development.   The local landowner, Lord Fitzwilliam of Merrion, had quarried the ground in the area to make bricks that were used to build houses on his estate in and around Merrion Square.

The Fitzwilliam estate passed in the early nineteenth century to their cousin the Earl of Pembroke, whose principal residence was at Wilton in Wiltshire.   The Honorable Sidney Herbert M.P. (later created Lord Herbert of Lea), brother of the 12th Earl, oversaw the management by an agent of the Irish estates.  Access to this district had been improved in the 1830s by the railway from Dublin to Kingstown, which had stops at Sandymount and Sidney Parade - named after Herbert.  Famed as the first commuter railway line in the world, it spawned residential development around it. 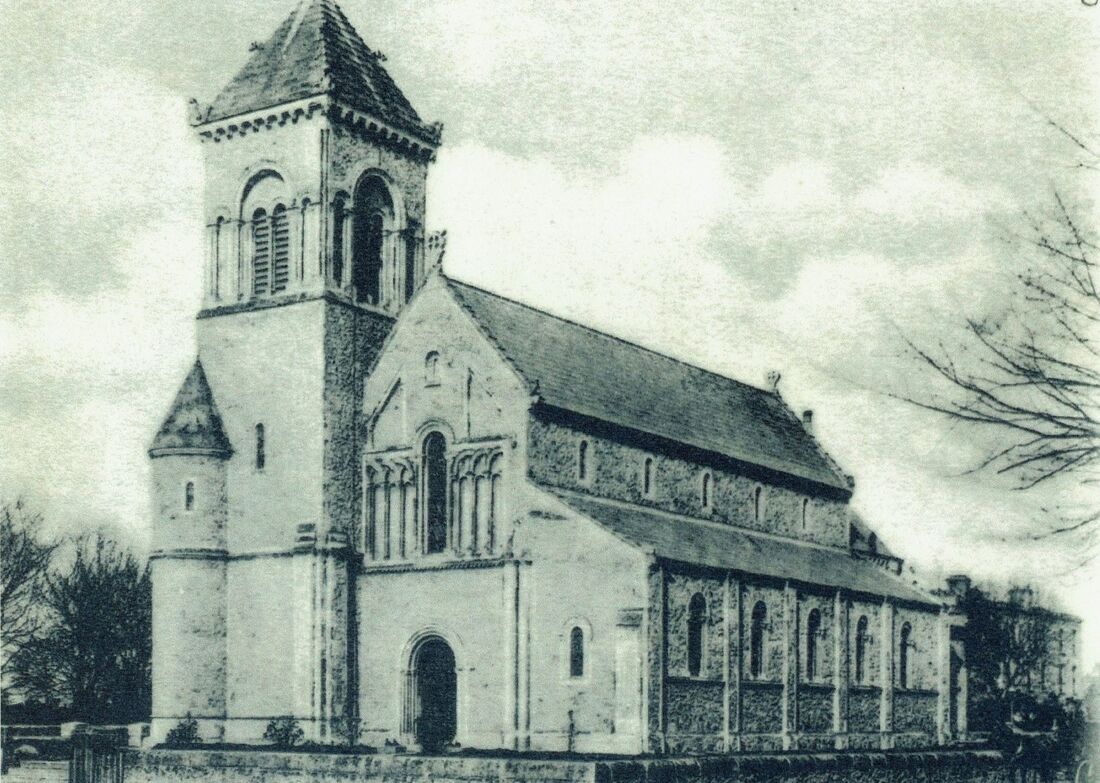 St John the Evangelist Church is built
​
The new residents in the neighbourhood wanted a Church that was closer than the existing parish churches of Booterstown and Donnybrook. The Church Building Acts allowed the building of privately endowed churches. When the residents approached Herbert for a site and a subscription, he responded by financing in full a new church of St John the Evangelist ‘for the cure of souls’. It cost £6000. The site he provided was in the townland of Sandymount just north of the border with the townland of Merrion, which was also the dividing line between the two parishes.

The architect was Benjamin Ferry, a pupil of the younger Pugin. St John’s was designed in the Romanesque style and was an extended replica of Ferry’s earlier church at East Grafton near the Earl of Pembroke’s family seat in Wilton.   The tower was built to resemble that on the eleventh century Romanesque church of St Pierre at Thaon near Caen in France that Herbert had visited and admired.   Stone brought from Caen was used.   St John’s was opened for worship on Palm Sunday 1850.

It was what was called a ‘proprietary church’.  The Deed of Endowment 1850 vested the powers, control and management of St John’s in the Trustees, of which Herbert was the first named.  They had power to nominate ministers to officiate in the church and to appoint three or more lay gentlemen from the regular attenders to act as a lay committee or churchwardens.  The minster so appointed was stated to be under the lawful control of the Archbishop of Dublin and subject to the rules and regulations in the Deed of Endowment. Herbert also set up an endowment fund to cover repairs as well as a stipend for the minister.

In 1879 the Pembroke Estate transferred the freehold of St John’s, previously held on a 150-year lease, to the Trustees: this made possible its consecration by Most Revd. Richard Chenevix Trench, DD, the Archbishop of Dublin.
​