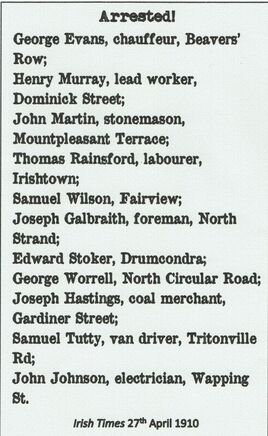 There were rumblings of discontent among some about perceived ‘Popery’ and ‘Romish practices’ in St John’s.  Matters became public in 1909, when several young men demonstrated by coughing, sneezing, hissing, hooting and stamping their feet to drown Fr Le Fanu’s voice when he was preaching.  A written complaint was made by St John’s to the police. On 23 January 1910, Superintendent Grant of Irishtown was stated to have around 30 constables and 3 sergeants on duty outside St John’s and three plain-clothes policemen inside the church to preserve decorum and remove interrupters.   The protesters were arrested following the Sunday Morning Service and were brought before the Police Magistrate, Thomas Chalmers Drury.  Frank Donaldson, a spokesman from Fowler Hall, a meeting place for the Orange Lodge, was also examined.

The courtroom was packed.  Evidence was given by Fr Le Fanu and his curate the Revd. Stewart Bruce.  Mr Drury declined to consider ‘ecclesiastical matters’ and refused to believe “that there could be illegal practices allowed to go on with impunity and that one of the officers of that church should disobey his ordination vows and proceed with illegal services.”   Commenting on the ‘gigantic’ difference in evidence between the parties, he added tactfully that he did not suggest that there was the slightest attempt to misdirect the court.

He held that there was deliberate coughing at the time of the Communion Service to the disturbance of the congregation and that it threw irreverence and confusion into the Service when the Lord’s Prayer was spoken in a loud voice and repeated while the choir sang.   Of a man who admitted to dropping on to the collection plate a note upon which he had written “No pay for Papish practices” he remarked: “That gentleman may be in his opinion a very good Protestant but he is a poor Christian.”

All the defendants were convicted, (except Tutty and Worrell who were acquitted)  but they escaped the imprisonment that the Magistrate said he had contemplated.  They were each fined 40 shillings and ordered to provide sureties of £10 that they would be of good behaviour in the future. The Magistrate was however, critical of the deployment of police in the church when follow-up summonses could have been issued after the event.   Mr Tutty was so aggrieved at being ‘marched ignominiously in custody’ by the police through Sandymount, where he lived, to Irishtown Station, that he commenced an action for false imprisonment against C.P. Coote-Cummins, the Churchwarden who had summoned the police.