Icon of St. John the Divine or the Evangelist 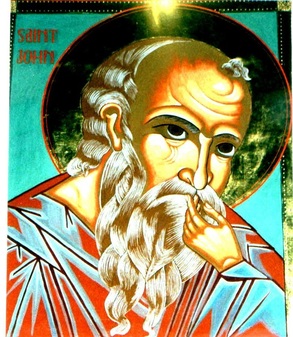 AN ORIGINAL Icon based on a XVIth Century Russian prototype of St John the Divine or Evangelist. Blessed at our Patronal Festival on 4th May 2002 by His Grace the Archbishop of Dublin Dr Walton Empey.

St JOHN the EVANGELIST or the Divine also called the "beloved disciple" is traditionally regarded as having taken the Virgin Mary to Ephesus after the Crucifixion. It is also believed that in the persecution of Damascus(AD 93-96) he was plunged into a cauldron of boiling oil but was delivered unharmed. Afterwards he was banished to the Isle of Patmos where he wrote the Book of Revelation. He died at Ephesus. His day is 27th December, and he is often represented bearing a chalice with a snake emrging from it, an allusion to his removing the poison from a cup presented to him to drink

In our Icon St John is shown in a gesture of silence. The Icon concentrates on his dramatically expressive head. His wrinkled forehead and wide open eyes which seem to look inward, create an attitude of deep mindful absorption. This accented by the gesture of the hand with the fingertips drawn towards the thumb. This gesture was customary among the Hesychasts in seeking an intense concentration on the Divine. The Hesychasts were, in the Eastern Church, supporters of the ascetic mysticism propagated by the monks of Mount Athos in the XIVth Century. The object of their exercises was to attain a vision of the “Divine Light” which they held to be God's “energy”.

St John speaks to us out of an intense silence, challenging us to aspire to a similar silence and intrenal calm where we ourselves can hear Christ speaking to us.

Our Icon was built by Fearghal O’Farrell, a qualified architect who has painted for many years and commenced painting icons some twelve years ago. He was founder Chairman of the Association of Iconographers of Ireland (1992). He has held several one person exhibitions and has partaken in many group exhibitions including Millenium exhibitions in Galway Cathedral and Derry Cathedral. He has also had showings in Christ Church Cathedral in Dublin and in other centres. His icons are in several Churches and Religious Centres as well as in private houses and collections.