The Court of General Synod had held that Fr Colquhoun had, unlawfully and in violation of the Canons of the Church of Ireland, set up in St John’s certain ornaments, including Stations of the Cross (which had been presented to St John’s by Evie Hone, then a member of the congregation).  In November 1938, the Dublin Diocesan Court, presided over by Archbishop Gregg, heard a petition for the removal of the Stations and other items, submitted by Arthur and Mabel Moran of Park Avenue, Samuel Caithness of Gilford Road, and Freda and Mary Kenny of Park Avenue.  Fr. Colquhoun appeared for St John’s.  The items claimed to be illegal or illegally introduced were:


The petitioners further complained that they had seen illegal rituals taking place:  ladies and a man kneeling at the crib; Mr. Colquhoun bowing to the crucifix as he left the pulpit; young men hurrying out of the vestry and putting things away when they, the petitioners, entered the church. The petitioners also expressed concern about the impact different practices North and South of the Border would have and pleaded that uniformity of practice throughout the whole of the Church of Ireland had to be maintained.

The Court made no order in respect of the crib or the so called ‘Mass Board’, which was deemed to be an ordinary notice-board. The Court ordered the Stations to be removed.  They were duly sold by auction at Lawler Briscoe and fetched seventeen shillings.  Another order of the Court was for the removal of the six large candlesticks on the Communion Table, notwithstanding that they had been presented as a memorial to a deceased member of the congregation.  They permitted the retention of the two small candlesticks on the Communion Table and the two on the second table – the latter pair had been gifted as a memorial to Jack and Ronnie Dunne who died in the Great War, by their parents.  It was stipulated that the candles had to be left unlit unless there was a need for light. 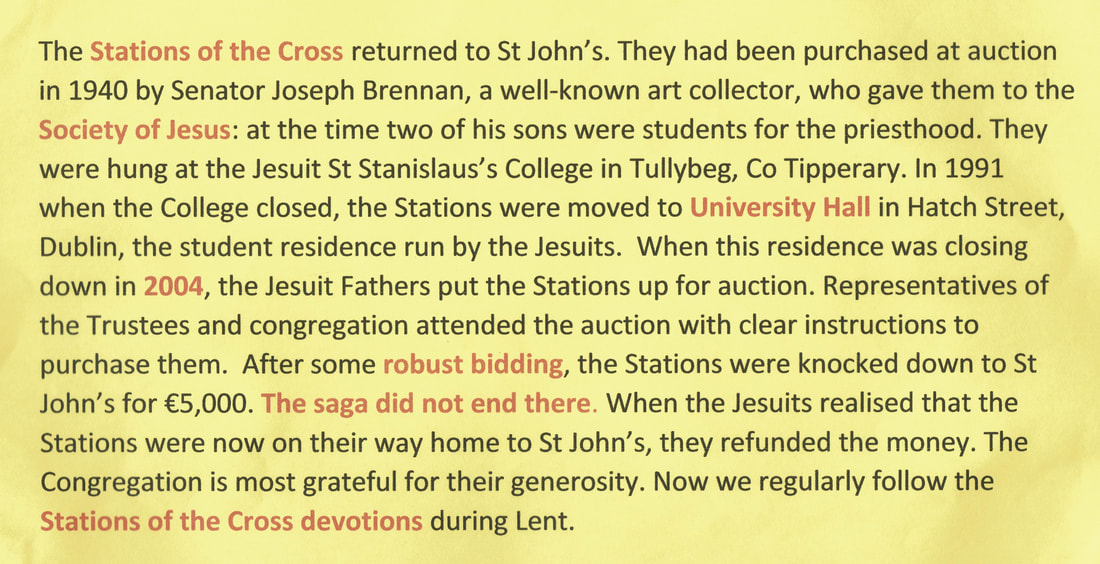