Future Poet Laureate John Betjeman attended regularly at St. John’s while he was British Press Attaché in Dublin during the Second World War between 1941 and 1943.

Born in London in 1906 into a middle-class family, he was educated at the public school Marlborough before going up to Magdalen College, Oxford, where he preferred the social life to study, and left without taking a degree. While there, he made friends with the genial Billy Clonmore (later Earl of Wicklow), and the Gaelic speaking Edward, Earl of Longford, founder of the Gate Theatre, both of whom often had him to stay at their Irish seats.

He was, therefore, no stranger to Ireland when in 1941, he was appointed Press Attaché at the office of Sir John Maffey, the British representative in Eire. Betjeman became a part of the Irish social scene mixing widely and indulging his love of architecture, particularly Victorian church architecture.

While still a schoolboy, he had read the works of Arthur Machen and was won over to High Church Anglicanism, which had its roots in the Oxford Movement of the nineteenth century, led by John Henry Newman (now a saint of the Roman Catholic church) and Edward Bouverie Pusey, who remained an Anglican.  Betjeman  was drawn to St John’s, whose High Church  Vicar Fr Randal Colquhoun had been suspended for six months  in 1938 by  the Church of Ireland on account of  his use of candles, incense, bells and the display of stations of the cross and a crucifix.
Betjeman attended St John’s with his wife Penelope, son Paul and daughter Candida.   An initial link was that he had lodged in Lucan with artists Eva and Letitia Hamilton, who were members of the congregation, when he first arrived in Ireland. Among other members of the congregation with whom he became friendly was Mrs Evelyn Earle, known as Tommy, with whom he exchanged Christmas cards until her death in 1966. She was a member of the Hemphill family of Clonmel; her cousin, Lord Hemphill, was an old friend of Betjeman’s.

An Oxford connection was the Revd Hugh Brodie, founder and headmaster of St Stephens’, a preparatory school for boys in Goatstown.   He   served as curate at St John’s in the 1950s. A letter to him written in 1954, sets out Betjeman’s vision for the planned redecoration of the church.  Commenting on its Victorian Anglo-Norman character, Betjeman urged against making everything too bright as ‘the appeal of the church is very much in its darkness’. In particular, he thought that the apse should seem ‘dark and rich and mysterious’. 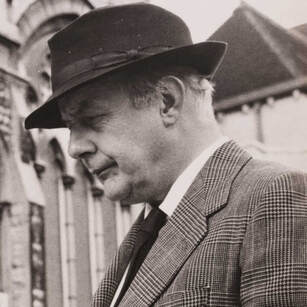