Fr Colquhoun was suspended for six months “from the discharge and execution of all the functions of his clerical office, that is to say, from preaching the word of God and administering the sacraments and performing all other duties of such clerical office”. Significantly, Archbishop Gregg dissented from the finding relating to obeisance and on the suspension. An appeal was launched to meet the legal costs. When this was criticised in a letter to the Irish Times as ‘a revolt against the discipline of the church’, Sir Cecil Stafford-King-Harman replied defending it.

The suspension made headlines at home and abroad. Within a week the members and communicants of St John’s had passed a resolution protesting against it.   “We have known our Vicar intimately for the last seven years, being bound to him in the closest spiritual bonds, and, therefore, we understand how deeply he must suffer from this sentence.  It is a very terrible responsibility to take, that in depriving an ordained priest of the exercise of his priestly functions and, surely, such deprivation ought not to be imposed except for serious moral delinquency or for grave dereliction of duty.”

The order of the Court was not served on Fr Colquhoun for some weeks. In the interval it was reported that he had conducted the service of Sung Mass at St John’s according to the customary ritual and ceremonial with a few minor changes. There was a large attendance at which he preached a sermon of temporary farewell on the significance of the crucifix in worship and made a plea for charity.   He also gave press interviews. To the reporter from the Irish Press, whose readership would have been almost exclusively Roman Catholic, he said:
“I am a Catholic. I preach and teach the Catholic Faith in its fullness and I believe that the Church of Ireland Book of Common Prayer contains the Catholic Faith. I teach all the principles of the Catholic Faith with the exception, of course, of the infallibility of the Pope.   I believe in the validity of my Orders or else there would be no meaning to what I am doing”.
​
The Revd Walsingham Collins Good, D.D was appointed by Archbishop Gregg to cover the period of suspension.  He had had his own experiences of the Courts when, in 1912, he had appeared before Mr Justice Barton in connection with the claims of St James’ Church, Crinken, to be a proprietary church and therefore outside the direct control of the Synod.

Fr Colquhoun continued to reside in the Vicarage and to attend Services at St John’s as a worshipper.  Newspaper reports relate how, on the first Sunday of his suspension, dressed in soutane and surplice, he sat inside the communion rails at the Morning Service conducted by the Revd Mr Good. The acolyte did not serve at the Communion Table but knelt beside the suspended Vicar. Flowers and unlighted candles stood on the altar. During the service, many members of the congregation made the Sign of the Cross and genuflected on entering and leaving the church.  Following the service Fr Colquhoun was surrounded by members of his flock who wished to shake his hand.

Fr Colquhoun was restored to his role of Vicar in May 1938 and was warmly welcomed back by his congregation. But the controversies did not end there… 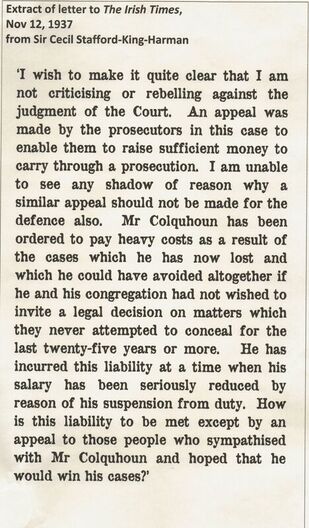