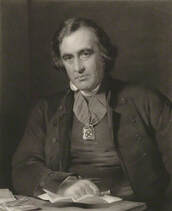 The former St John’s Parochial Hall stands across the road from the church. Presenting a lonely aspect now as it awaits redevelopment into a private residence by its current owners, the Hall was once a hive of activity, bustling with classes, meetings, concerts, bazaars, dinners, lectures and many other events involving both the congregation and local community groups.

Following a number of years of fund-raising, the architect and surveyor William Butler, a relative by marriage of the Vicar the Revd Davidson-Houston, was engaged by the Select Vestry to design the hall with the proviso that it must include a classroom. It was built on land leased from the Earl of Pembroke and was opened to great fanfare on 3rd April 1883, by His Grace the Archbishop of Dublin Richard Chenevix Trench.  After a short service in the church, the large crowd, led by the Vicar, proceeded to the Hall for speeches and refreshments.  In his address, the Archbishop admired the stone-built edifice whose ‘lofty roof gives an airy and commodious appearance’, and, more practically,  reminded those present that while some £700 had already been subscribed , a further £200 was still needed.    He emphasised the educational uses of the Hall and exhorted those present to take as their motto the lines from Chaucer ‘Gladly would he learn and gladly teach’.
St John’s lost no time in promoting learning and teaching in the Hall; it was used for Sunday School and church meetings and rented out to others for a fee, which brought in a steady income.  Records show that shortly after the opening, the Revd Travers Smith delivered a lecture to an appreciative audience on his recent tour of Spain.   Religious groups using the Hall included the Women’s Missionary Association, the Society for the Propagation of the Gospel, Church Lads Brigade, The Temperance Society, the Hibernian Band of Hope, and the Girls’ Friendly Society. There was a parochial library, a clothing club and a Missionary Working Party.  In the 1930s the sisters of the Community of St John the Evangelist used the Hall as a school for the girls living at the convent’s orphanage on St John’s Road.
Drama groups using the Hall included St John’s Society, which staged a production of ‘The Sensational Action for Defamation of Character or Fitzbluster v. Bluster’ in 1891. The Park Avenue Players and the Dublin Religious Drama Groups also played there in later years.   In 1932 the Pembroke Players’ Amateur Dramatic Society staged The Flipper’s Holiday, produced by Connie Morris, Audrey Erskine and Betty Meredith.

Musical productions also featured. The Pembroke Choral Society, under the baton of their conductor Walter Babty, gave a number of concerts in the 1880s and 1890s ‘to a large and cultured audience’.  The Choral Union also used the Hall.  In October 1915, the renowned performer Percy French gave a concert there in aid of St John’s House of Rest on Merrion Road.   At the time, the Vicar of St John’s, Fr Le Fanu, was its chaplain.
Sport was accommodated.  Table tennis was played and there were gymnastics.  The Excelsior Hockey Club, Pembroke Swimming Club and Corinthian Hockey Club held meetings and events at the Hall.
​​ 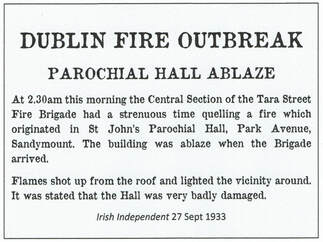 In 1933 the Hall was almost lost to a blazing fire. The firemen of Tara Street Fire Brigade managed to prevent the flames from spreading to the nearby vicarage, but the roof of the Hall itself collapsed leaving only the outer walls standing.  The roof had to be reconstructed and the building repaired.
By 1960, St John’s was in financial difficulties, as a result of which the Trustees decided to sell off the Hall and the adjoining vicarage.  The Hall was bought in 1963 by Olympian fencing master Professor Patrick J.  Duffy for £2,500. He located his Salle d’Armes there. With his wife Shirley Armstrong, herself a fencing Olympian, Maitre Duffy’s school went from strength to strength, becoming the home of the Academie d’Armes d’Irlande, the professional association for the training and regulation of fencing masters. The Duffys were generous in allowing St John’s to use the Hall for special events.  When Professor Duffy died in 1987, his funeral service took place in St John’s.  Madame Duffy continued teaching fencing until 2007.  After her death in December 2018, the Hall was sold again and fetched a reported €2.4 million.