‘A Man of Culture and Refinement’

The Revd. Samuel Randal Sproule Colquhoun (1883-1961) was the son of the Venerable William Colquhoun, Archdeacon of Derry, and Maria Cashell of Co Londonderry.  Fr Colquhoun was born in Bristol where his father worked for a short time. On completion of studies at Trinity College Dublin, his first appointment was to Kilmore in Co Cavan.   Following several other appointments, in March 1930 he applied for the post of Vicar of St John’s left vacant by the retirement of Fr Le Fanu. Described by the Bishop of Meath, the Most Revd. John Orr, D.D., as “a man of culture and refinement and in tune with things as they are at St John’s”.      He was selected from a list of seven candidates and appointed to the post on 7th June 1930.

Like his predecessor in styling himself Father, he continued Fr Le Fanu’s High Church rituals and ceremonies.  This was to lead to regular altercations with those opposed to such practices in his own congregation and elsewhere, and with the General Synod.   St John’s fell under what the Irish Independent called ‘microscopic observations’. 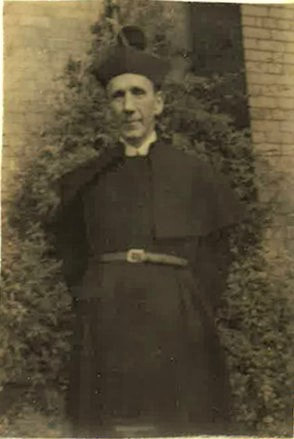