William Percy French, civil engineer, artist, journalist, performer, and songwriter, who died just one hundred years ago at the age of 65, is probably remembered in Ireland with more affection than any other person of his background and era.  He had interesting connections with this part of Dublin and with St John’s Church.

Known as Willie to his family, and by his stage name Percy French to most of us, he was born in 1854 at Cloonyquin House in Tulsk Co Roscommon, the second of nine children of a local landowner.

He took eight years at Trinity getting an engineering degree:  he spent too much time composing songs and playing them on his banjo at concerts instead of studying.    He wrote one of his best-loved and sadly plagiarised songs Abdulla Bulbul Ameer while still a student.

He secured employment with the Midland Railway and then with the Board of Works in Co Cavan as a self-styled ‘inspector of drains’.  This entailed much travelling around in a pony and side car and often he was accompanied by his beloved sister Emily, perhaps the closest of his siblings.

But Dublin drew him back when the Board of Works was cutting down on staff and he took up journalism, contributing to the Irish Cyclist and Athlete and editing with the Stillorgan artist and architect Richard Orpen and his friend Eddy Radcliffe a short-lived magazine called The Jarvey.  He met the beautiful nineteen-year-old Ethel Armytage Moore. Known as Ettie, they were married in St Stephen’s Church, Upper Mount Street, on 28th June 1890.  and took up residence in a villa, Victoria Lodge, at 3 St John’s Road in Sandymount, a stone’s throw from St John’s.  Tragically, she died there a year later after giving birth to a daughter, who also died shortly afterwards.
​
He became a professional entertainer, teaming up with Dr W H Collisson, who was to collaborate with him on and off for many years. In 1894, French married Helen Sheldon, known as Lennie, who had come from England to appear in one of his revues.  They took a house at 35 Mespil Road and two of their three daughters were born there. In his inimitable style French would invite friends to visit:  We are living by the canal – do drop in.
Around 1900, the French family moved to London where there were many opportunities for entertaining, ranging from stately homes to public schools, home entertainments and dinner parties.    International tours were to follow in 1910 across the ‘Atlantical sea’ and later to Switzerland.

While the family settled down to their new life, with their children Ettie, Mollie,  and Joan, his yearning for home is reflected in songs such as The Mountains of Mourne, written in 1902, or  Come Back Paddy Reilly written in 1912.   French’s nostalgia for Ireland is evident also in many of his wonderful landscape paintings.  His light-hearted take on events is also never far away:    such as the legendary railway song Are ye right there Michael recalling with bemused eye an episode on the West Clare Railway back in 1896.   While his English engagements were cut back due to the outbreak of war in 1914, Irish performances continued apace. He often stayed with Emily and her husband Dr De Burgh Daly at 71 Park Avenue.

A number of significant events in 1916 a took their toll on his health. He was very shaken by a fall in his house damaging some ribs. On Easter Monday his brother in law Dr de Burgh Daly had a lucky escape when Constance Markievicz shot at him while he was seated at the window of the University Club on St Stephen’s Green.  The incident deeply shocked the family.   On 9th September of that year French’s beloved nephew Charlie De Burgh Daly, aged 19, was killed at the Battle of Ginchy.  French was so distraught that he couldn’t put his feelings into a letter, so instead he wrote some verses, sadly never published, and sent them to Emily with the words:  I tried to write a letter, dear, but could not, so send these.   Charlie is remembered on the War Memorial in St John’s. The same year French had an accident at Blackrock Railway Station when he was dragged along the platform by a moving train.

Emily recorded that he was never the same again and each time he came to Dublin he seemed frailer. During the flu epidemic of 1918, he appeared at the house on Park Avenue so collapsed and worn out that Dr De Burgh Daly put him to bed for a week.   Towards the end of the week, however, he was sitting up painting and entertaining the two housemaids who were absolutely devoted to him.  He also stayed at Park Avenue for some time over the summer and he and his then stage partner May Laffan would fill the garden with melody as they rehearsed for future shows.   In January 1920 French was taken ill while on an engagement in Glasgow.  He travelled to a cousin’s house near Liverpool, dying there on 24th January, aged 65 and was buried in St Luke’s Parish Church, Formby.
​
In July 2019, St John’s was delighted to host a concert conducted by Percy French’s Great Grand Nephew John Daly Goodwin, who travelled to Ireland from New York with the A Viva Voce Festival Chorus.  The programme included John’s arrangements of some of Percy French’s songs. 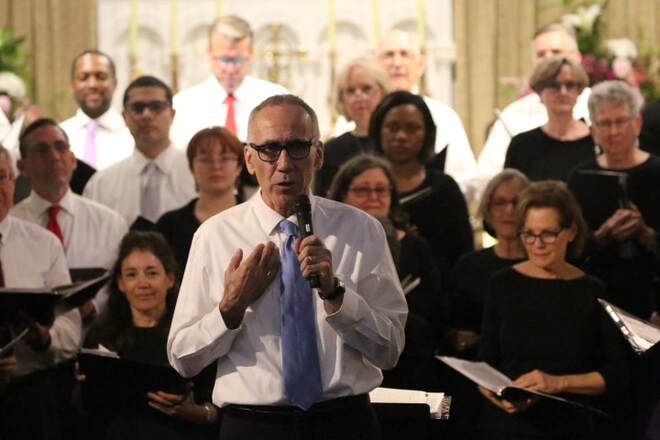